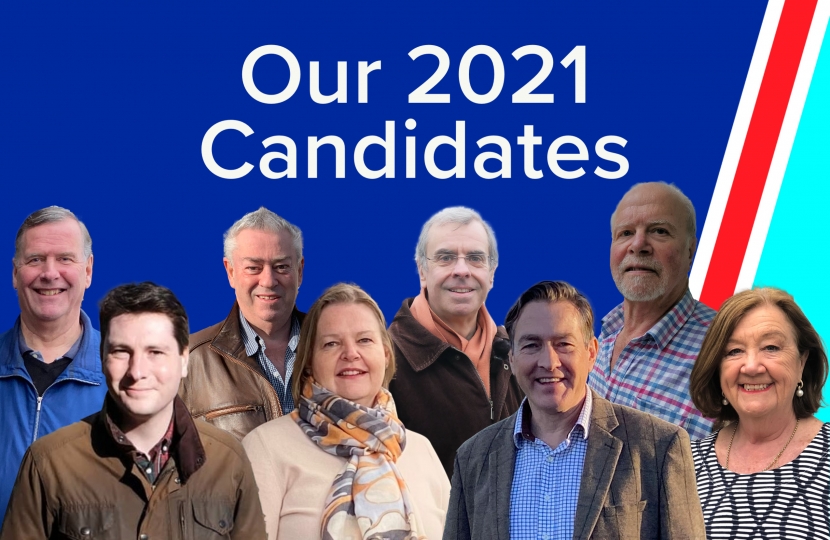 Elections will be held on Thursday 6th May for the Guildford seats at Surrey County Council - below are your Conservative candidates.

Andrew says "Our High Street in Cranleigh needs further improvement, especially the pavements, and I have obtained £200k for this. I will build on my previous work in helping the creation of Fountain Square. Looking forward to the next four years, I hope to bring these improvements to our High Street to fruition and to take forward the Ewhurst Parish Council proposals for traffic calming and village enhancements.

"There is much to do, and I look forward to progressing these exciting projects."

Philip is a Chartered Surveyor and has been associated with Guildford most of his life. He studied at Guildford Technical College and has lived here for 35 years including 10 in Merrow. During his career he has worked in various construction companies including 15 years’ executive experience. He has experience in major infrastructure projects including roads, railways, seaports and airports.

Philip says "I am an experienced Councillor and held an executive portfolio covering housing and homelessness at Guildford Borough Council and have significant experience in infrastructure. I am keen to ensure that the Gosden Hill development’s main entrance is to the north of the site at the proposed new junction of the A247 to minimise congestion in Burpham. I support the proposed A3 tunnel underneath Guildford and a new railway station at Merrow."

Chris has lived in Bellfields for fifteen years with his wife and son. His son attends school in Guildford and participates in the Wey Kayak Club and activities at the Spectrum and Surrey Sports Park.  As a local resident Chris is passionate to make Guildford North a better place to live. He is concerned about the prospect of building 1500 new homes on Slyfields without first putting in the infrastructure required by so many new people. Traffic congestion will become worse especially at peak times.He wants to increase investment in our roads and protect services for existing residents.

Chris says "I will work collaboratively to support policies that are backed by common sense, especially if they protect the local environment. I have never stood for office before, but I have a vested interest in our area and If elected I will do my very best to represent the people of Stoke and Stoughton."

Mark has maintained an association with Guildford since 1974, when he first moved to the area. After studying architecture at University College London and the Royal College of Art, London he completed an MA in Design at the University of California at Berkeley. He returned to Guildford to work, initially with large commercial architects, before establishing his own company in 2004.

As a councillor he has worked hard for the local community, successfully achieving many good results over the years, including resurfacing of roads, getting the High Street setts re-laid, initiating safety schemes near schools and sustainable transport strategies for the area. Mark was Chairman of the Guildford Local Committee for 5 years, as well as Chairman of the Education and Skills Scrutiny Board and the Children and Education Scrutiny Committee.

Mark says "I have a deep commitment to my local area and will continue to work diligently to represent Guildford residents."

Sallie has lived in the centre of Guildford for over 30 years and now wants to ‘put something back’ and help support the community she has enjoyed living in. Sallie's skills, knowledge and experience make her well placed to represent the residents of Friary St Nicolas and Onslow and she will do so with energy and commitment.

Sallie's priorities, if elected, would be to:

Sallie says "If elected I will be active in my role as Councillor, listen to residents, get the support they need and ensure the best services for Friary St Nicolas and Onslow."

Guildford has been Dorothy's home for more than 15 years. She is committed to listening to the local community and will be an effective voice at Surrey County Council. She will ensure that part of the £100m Your Fund Surrey is secured for local community projects to enhance the area for residents.

Dorothy says "The two issues that residents in Guildford West contact me about most frequently are the state of local roads and pavements, including parking on pavements, and anti-social behaviour. I will ensure that Surrey County Council prioritise and tackle these road, pothole and pavement repairs. I will work with residents, police and other agencies to tackle anti-social behaviour, including domestic abuse."

Dorothy is supporting the call for a new station at Guildford West, and long term proposal to tunnel the A3 under Guildford, to ease congestion, create a cleaner environment and better integrate Guildford West with our town centre."

Matt has lived in Guildford for over 20 years. He was educated locally at Boxgrove Primary School and George Abbot School before graduating the University of Surrey. He works for an organic food company.

Matt says "I work hard with residents and parish councils to deliver improvements in our villages. Using my community allocation for projects from new trees to new playgrounds. I have delivered a large number of road and pavement resurfacing programmes locally, plus new school crossings, lowered speed limits and junction safety improvements. Rights of Way have also been invested in directly using my allocation. Parking for residents and  congestion caused by utilities remain the top two issues and I will work with the local residents to resolve these issues."

Kevin has lived in the village of Alfold for 28 years. He started his police career in 1980. Over a 30 year career, Kevin rose through the ranks to Detective Chief Superintendent. Following his retirement, Kevin became a parish councillor at Alfold, and in 2015 was elected as the Borough Councillor for Alfold, Cranleigh Rural and Ellen’s Green.

Kevin is committed to investing more into our roads, ensuring rural areas receive fairer funding. Adequate infrastructure must be put into place for planning developments and unsuitable roads for HGVs must be designated. Kevin is a positive and strong voice for our communities.

Keith has spent his life working in the voluntary sector including charity fundraising and communications.

As a Surrey County Councillor, he has concentrated on getting support for local projects. In the past few years, he has achieved road/pavement resurfacing at 42 local locations; road safety schemes at 39 local locations and sponsored 119 grants for local voluntary Groups. But he always want to achieve more for residents.

If re-elected, Keith will continue to campaign for more improvements to the area and continue to communicate regularly with residents. Anyone in Fairlands, Fox Corner, Jacobs Well, Normandy, Pirbright, Wood Street Village, Worplesdon and the Broadacres area of Guildford can get in touch with him on any issue.